Have you been injured in a rear-end collision in Harrisonburg, Virginia? Rear-end crashes are one of the most common types of accidents on American roads.

According to the National Transportation Safety Board (NTSB), nearly half of all two-vehicle crashes in the U.S. are rear-end accidents. These collisions may cause serious injuries or fatal injuries. More than 7 percent of all fatal wrecks are rear-end crashes, according to the Insurance Information Institute.

At Kendall Law Firm, our Harrisonburg car accident lawyers understand that the aftermath of many rear-end accidents can be painful and expensive. You may have significant medical bills through no fault of your own and be out of work for a lengthy period of time.

Our Harrisonburg injury attorneys can help you pursue a claim against the at-fault driver and seek full compensation for your medical bills and other losses. Call us today at (866) 590-9773 or contact us online to learn more in a free initial consultation.

Who Is at Fault After a Rear-End Accident in Harrisonburg, VA?

Many people assume that a driver who hits the rear end of the vehicle in front is always at fault in a rear-end crash. That is generally true, but there are exceptions.

Drivers are expected to maintain safe following distances and remain alert and in control of their vehicles at all times. Drivers should allow enough time and distance to stop and avoid rear-ending other vehicles.

However, unexpected events sometimes happen. Depending on the specific facts of a collision, any of the following may be partially or fully liable for a rear-end accident in Harrisonburg, VA:

Although rear-end car accidents are commonly seen as minor fender benders, many of these collisions can result in serious injuries, such as:

Some of the most common causes of rear-end accidents in Harrisonburg, VA include:

What to Do After a Rear-End Car Accident?

Rear-end accidents are common, but being involved in a crash can feel shocking and disorienting. If you’re not sure what to do after a rear-end car accident in Harrisonburg, here are some steps you can take to protect your legal rights and your ability to recover:

Settlement for a Rear-end Car Collision

Every crash has unique facts, so there is no average settlement for a rear-end car accident. If you have been injured in a Harrisonburg rear-end collision, multiple factors will determine the value of your claim such as your:

Many rear-end car accidents occur in Harrisonburg and throughout the Shenandoah Valley. The following news stories describe two such wrecks that tragically resulted in fatalities. 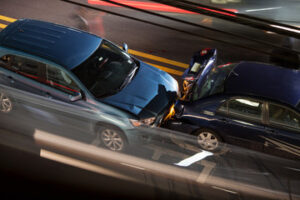 On the evening of October 7, 2021, state police responded to a rear-end crash that occurred along southbound I-81 in Rockingham County. According to reports, multiple vehicles were stopped in heavy traffic when the driver of a 2006 Buick Lucerne collided with the rear end of a 2010 Honda CRV. The Honda, which had stopped due to traffic, was subsequently pushed forward into the back of a 2017 Chevrolet Silverado, which was also stopped at the time.

At approximately 6 p.m. on Christmas Eve in 2021, a tractor-trailer traveling near Rockfish River Road in Nelson County rear-ended a Honda Odyssey when the Honda driver stopped abruptly after colliding with a deer. According to Virginia State Police, all five occupants of the Honda minivan and the tractor-trailer driver sustained injuries in the crash.

The truck driver suffered only minor injuries that were treated at the scene, but each occupant of the minivan was transported to a nearby hospital to be treated for more serious injuries. One four-year-old boy sustained severe injuries, and an eight-year-old girl sustained fatal injuries.

An experienced attorney at Kendall Law Firm can help you understand your Iegal options if you have been injured in a rear-end accident in Harrisonburg, VA. Our dedicated lawyers have more than 30 years of experience fighting to help injured people rebuild their lives and move forward after serious injuries.

Call us today or fill out our online contact form to get started with your free initial case review.

I highly recommend the Kendall Law Firm to anyone who has been hurt in an accident. My attorney was very helpful throughout the process. He was accessible and easy to talk to, and he fought hard to make sure the insurance company paid me for my injuries. Continue reading →